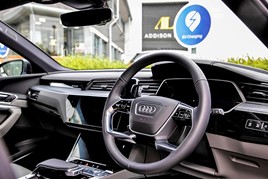 A trial of five Audi e-tron SUVs is helping Addison Lee Group take significant steps towards its aim of a zero emissions-capable fleet by 2022. They are the first electric cars the private hire company has taken on and it is using the pilot scheme to gain operational insights into their real-world performance.

“There has been a lot of effort going into our fleet roadmap of how we are going to meet our 2022 objective,” says Paul McCabe, innovation director at Addison Lee Group, which has a fleet of 5,000 vehicles.

“We’ve got to decide which products we take on, how many and the mix between pure electric and hybrid because we do a lot of long distance work that’s nationwide as well as our work focused in London, so this pilot is really informing the decisions we make next.”

The e-trons are being used to transport select ‘roadshow’ clients with access to a corporate chauffeur service in and around London under Addison Lee Group’s premium Tristar service.

“Broadly, we are needing roughly two 100% charges a week and then small top-ups, all on ultra-fast charging,” says McCabe.

“The drivers do pause between dropping people off and picking them up on these particular circuits, which gives them the opportunity to charge.

“It does have to be ultra-fast charging though to make sure they are there for their passengers when they come out of meetings.”

McCabe says charging will be the “biggest challenge” when Addison Lee Group rolls out electric vehicles across its wider fleet. 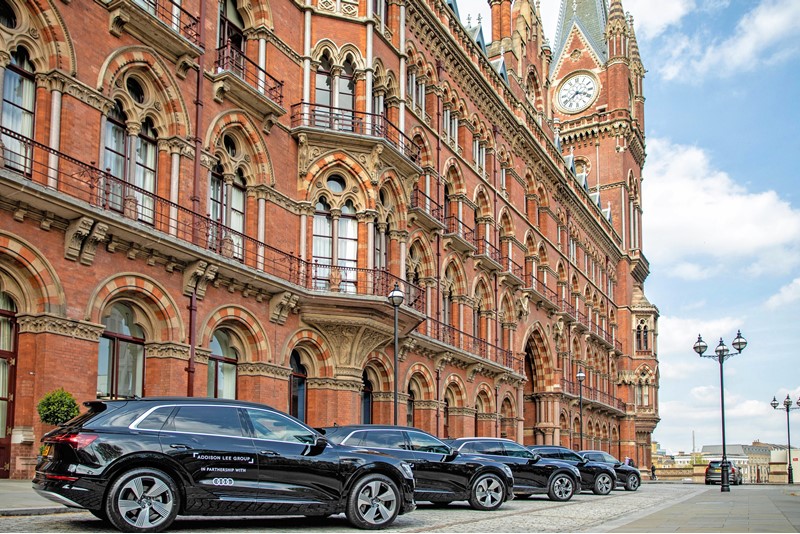 The company commissioned research in 2017 which found that more than 8,000 rapid chargers would be needed in London if all private hire vehicles were electric. Under current plans, Transport for London is committed to installing 300 by 2020.

“There is a severe underinvestment in this space,” says McCabe. “We need to see charging infrastructure increased hugely over where it is today.

“When we approached the e-tron pilot we were considering whether we would have to implement a return-to-depot charging strategy.

“The capability of e-tron meant that didn’t need to happen, but if you look towards the future and perhaps electrifying our Select fleet with lower capacity batteries to keep the costs of the vehicles down, then charging becomes more of a challenge.

“Black taxis have the luxury of their own charging structure and what we are finding is quite often we are waiting in a queue for consumers to use the consumer network, while over the road there is an available black taxi charging point.

“There is no thought going into how fleet operators like us could benefit from the existing taxi charging network.

“Nor is there any thought to preferential tariffs. Because we are using the public infrastructure, the cost broadly equates to fuelling conventional vehicles, so we don’t get the cost benefit we would if we were home-charging.”

“The reason we became involved is that both our and Addison Lee’s strategic objectives are remarkably similar,” he adds.

“From an Audi perspective, e-tron is just the start of our electrification journey, so the real-world data about how the vehicle performs in a heavy usage scenario will help us shape our future strategy around e-tron and e-mobility.”

Audi will have at least 20 plug-in hybrid or fully electric vehicles by 2025.