Fleets that outright purchase or take the residual values risk on a finance lease agreement could be in for a windfall when they come to sell their vehicles because of a shortage of models coming on to the used vehicle market.

However, they need to buy the right vehicles now to get the healthiest returns.

An anticipated four-year period of lower new car sales, stretching from last year until 2012, will result in ongoing stock shortages for younger used cars – and that will raise prices.

The most important message to fleets is to select the right vehicles with the right level of equipment and the right colour, according to Tim Naylor, BCA public relations manager.

“A lot of companies are still not paying enough attention to the model cycles, specifications, etc, of new vehicles,” he says.

Awareness of model renewal cycles is increasingly important as manufacturers shorten lifecycles. Ordering models that are on run out and will be replaced by a new model in a few months could prove a false economy.

While they are likely to offer higher levels of equipment and may be attractively priced, if the replacement model proves popular, the previous model’s RVs will suffer.
Paying attention to what other models are about to be launched is also important.

“As more models come to the market, even though there will be a shortage of used cars, it will be more important to have the right cars with the right specifications,” says Professor Peter Cooke, who authored the 2010 Used Car Market report, sponsored by BCA.

“The message I have is that you must get the specification right,” he adds.

“You need to specify the new vehicle to make it attractive as a used vehicle.”

Fleets must also remain focused on how the used car market is performing.

It has been particularly volatile over the past two years with massive falls in prices in late 2008 countered with significant rises in late 2009.

Those falls hit leasing companies hard and drove up lease costs as they sought to recover the millions wiped off their balance sheets by falling residual values.

However, as new car and van sales remain low, sellers and buyers need to prepare for the impending shortage in the used vehicle markets.

New car sales were also boosted by the scrappage scheme, which helped fund an additional 285,000 new car deals. Without the scrappage, last year’s sales would have dropped by 19.8% year-on-year to 1.71 million, which is comparable to the lowest annual volumes recorded in the last 20 years, when figures of 1.6 million units were registered in 1991 and 1992.

However, the outlook is difficult to predict due to uncertainty over the economy, impact of the 2011 VAT changes, levels of pent-up business demand and manufacturing capacity.

There is a fear that the October spending review and a possible double-dip recession could drive down demand in the used market.

Company car mileages fell by over 20% during the recession despite the average age of stock rising, according to Aston Barclay Auction Group.

However, the trend looks to be reversing this year with business mileages returning to pre-recession levels.

Aston Barclay is witnessing this return to pre-recession mileages with average annual company car mileages this year reaching 13,873 – up more than 2,500 miles on last year.

While the majority of fleets are planning for higher mileages, this is not the case with the largest fleets. Just one-quarter of Fleet200 companies expect their fleet mileages to increase over the coming 12 months.

There some contradictory figures on average ages of ex-fleet cars coming to auction. 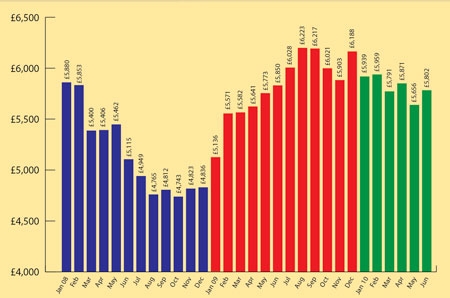