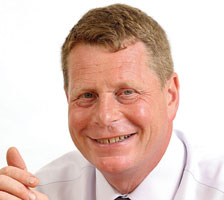 I have been with Hitachi Capital for 23 years, which I consider as an achievement in itself.

While I have been at the company, we have survived three RV collapses, two recessions and in my 11 years as CEO we have an unbroken profit record.

For 22 of my 23 years with the company my boss was David Anthony. To say he was a “driving force” is an understatement – he was a major influence in my advancement within the company.

It is an ambition of mine to fly a light aircraft in New Zealand. I would relish the opportunity to combine one of my personal interests with stunning views and scenery, and I would also love to experience a beach and mountain landing.

My favourite sitcom is Rab C Nesbitt. It is just hilarious, especially the ‘super glue’ scene.

It is a choice between The Shawshank Redemption and Gladiator. As Shawshank has a happy ending, I’ll go with that.

What three things would you take with you to a desert island?

A fishing rod, my IPAD2 3G and a solar charger so that I could use it.

I took the train from Trowbridge to London in May to meet a customer at the Institute of Directors.

Unfortunately, it wasn’t a pleasant experience as the train was running very late and was incredibly crowded.

It would have to be to reduce fuel duty. If they let me stay another day I would dissolve the Health and Safety Executive and replace it with something that works for business as well.

What is the first thing you would buy if you won the Lottery?

It has always been a dream of mine and my wife’s to live by the sea. We would buy a house on the south- west coast within walking distance of the beach.

Then I would buy a new plane to get me there quickly!

In the mid-90s I bought a small vehicle portfolio and did not do enough due diligence – I will never make this mistake again.

I remember living within walking distance of the sea and spending most days of the summer holiday in it or around it.

I don’t have one – I believe in trying something new if you can.

When the road fund licence reminder came for my wife’s Land Rover Defender TD5 and I saw the CO2 – fortunately, she drives a Mini D most of the time.

I read all of the Fleming Bond novels consecutively so I’d have to say James Bond.

I love classic cars and would be torn between a Ferrari Dino 246GT, a Lamborghini Muira and a 1968 Mercedes 280 SE Cabriolet (seen in the film The Hangover). Given that it’s summer, I’d pick the latter – unless I did win the lottery, then I’d get all three.

Has there been a pivotal moment in your life?

When I was sales director at Hitachi Capital, I briefly left to join a ‘dotcom’ (before the bubble for these burst).

This ended up being the catalyst for me re-joining as MD of Hitachi Capital Vehicle Solutions.