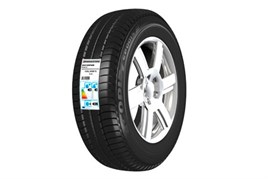 The scheme displays the wet grip and economy results through a colour-coded graduation from green to red, as well as a score from A to G, where A is the highest and G the lowest – although not all grades are used for each of the ratings.

The difference between each grade means a reduction or increase in fuel consumption of between 2.5% and 4.5%. According to Continental Tyres, that’s a difference of 0.42-0.56mpg for a 36mpg car per grade.

Consequently, a C-rated tyre will use one litre more fuel than a B-rated tyre over 625 miles – a cost per tyre of around £1.40 at current diesel prices, or £5.60 per vehicle.

The fuel efficiency difference between a set of tyres rated A and one rated G is up to 7.5%.

Meanwhile, a tyre given an A rating for wet braking stops in the shortest distance from 50mph, while tyres from class B take an additional 3-6 metres – an increase or decrease in stopping distance of between one and two car lengths.

That trend continues for the subsequent values and results in an increase in braking distance of more than 18 metres – around three or four car lengths – from a vehicle with an F-rated tyre compared to one with an A-rated tyre.

Noise is likely to be a lower influence on fleets’ purchasing decisions and the labelling scheme only relates to future European regulations.

One black wave on the label means low noise – at 3db or more below future noise limits; two black waves is equal to or below by up to 3db; three black waves is a level greater than future limits, but still complies with today’s regulations.

The useful lives of tyres vary widely, depending on the type and quality.

Some last twice as long as others – typically equivalent to more than one extra year of driving.

Cold weather tyres are a good example of why labelling is only one part of the story, according to Guthrie.

“When it’s 20 degrees below zero, it’s much more important that the tyres are able to cope with ice and snow than it is to cope with a wet road at 20 degrees,” he explains.