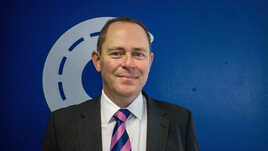 By Rupert Pontin, Director of Insight at Cazana.

The last month has been a turbulent one in political terms and there has been a great deal of concern as to how this may have impacted the retail sector as a whole, and the news has not been brilliant.

Further warnings around future investment in the UK and the viability of running certain business types as profitable organisations have been rife.

There have also been multiple profit warnings and major UK business failures in the retail sector.

In the Automotive sector, dealer group performance has been patchy with some companies reporting stability, and in some cases positive results, although there have also been those that have posted a turn in fortune and in some cases larger dealer groups have slipped into a negative position that has prompted significant senior-level management changes.

The charts below show the current state of both retail and business confidence in the UK. 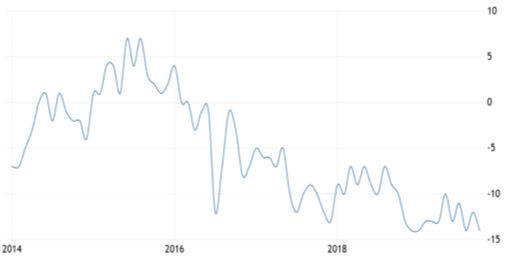 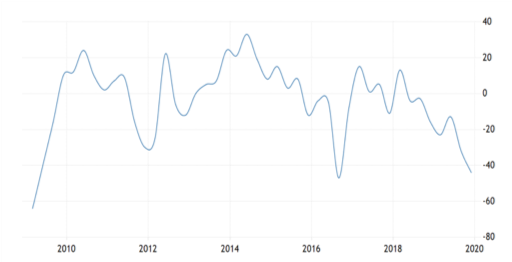 The consumer chart reflects the feeling of retail customers at the moment and is at a 5-year low point with the belief that confidence has dropped again in recent weeks.

Thankfully this negative view has not been entirely replicated in the automotive industry and despite challenging trading conditions for the new and used car markets demand has remained reasonably good.

The exception has been in the new car private sale sector which during October recorded a worrying 13.2% drop in registrations.

This perhaps reflects a drop-in availability of new cars but is more likely a reflection of consumer confidence.

However, some sectors of the used car market are experiencing shortages of certain types of popular vehicles and pricing has been resilient and in line with normal market expectations which is good news.

From a business perspective, the news is less encouraging and confidence has almost fallen to a new 10 year low.

This is driven by not only Brexit but also the impending general election.

This distraction at what is already a challenging time of year can be best described as unwelcome and at worst almost disastrous for UK business and the economy.

Looking specifically at the automotive market and the chart below shows the performance of retail pricing on the used car market at key age and mileage profiles against the same period over the last three years: - 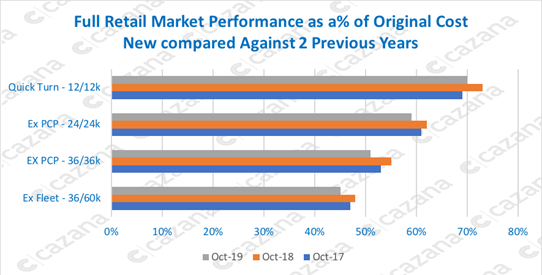 This chart quantifies the current market position from a pricing perspective, and it is interesting to note that retail pricing at all key age and mileage profiles is lower than it was at the same time last year.

Every profile except Ex PCP at 36/36k has seen a reduction in pricing of 3% over the same period last year and the former has recorded a 4% drop.

Of note is the fact that the position for the sub 12month 12k cars has improved since last month when prices reflected a 7-percentage point decline which was primarily due to the performance of petrol car pricing off the back of excessive volumes of petrol-powered cars coming to the market.

This month it is the EX PCP cars at 26 months and 36k that show the largest decline in pricing and this reflects the new car activity three years ago.

At that point, the market was beginning to decline, and the new registration plate had recently come out and PCP business in 2016 was how the OEM’s were finding homes for new cars.

This is the impact of that tactical push for the new car market.

It is possible that pricing at his age and mileage profile may continue to decline next month but of course, this is directly related to how dealers find homes for these cars in the used car market and whether volumes remain the same or decline.

In recent weeks the buzz in the market has been around the difficulty in the late plate petrol car market and what impact this may have not just in the coming months but also on how it may affect used car pricing at other age and mileage profiles.

It is also worth considering what effect this latest round of petrol frenzied registrations may have on the used car market further down the line.

With new diesel car registrations so low and hybrid and BEV growing but still taking a small percentage of the overall market, the used car landscape is going to look remarkably different in three years, as is the global CO2 emissions data!

Given the concern around the petrol car market and severity of the pricing decline in the sub 12 month sector over the last two months, the chart below looks at petrol car pricing in more detail in the chart below: - 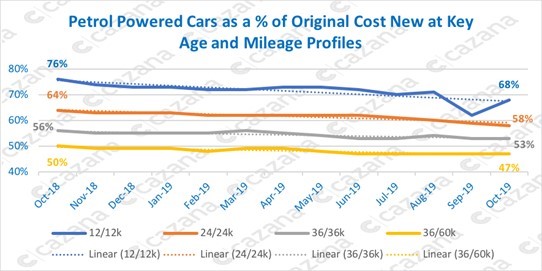 This chart is interesting because it looks at petrol pricing performance over the key age and mileage profiles.

Of immediate concern, as highlighted last month is the 8-percentage point drop in pricing of the sub 12 months and 12k profile.

Last months significant decline is obvious, but this is the sector to watch very closely in the coming months.

This chart then reveals that the pressure is now being felt on cars in the 24- month 24k profile with pricing having dropped by 6 percentage points over the same period last year.

What is also clear from this chart is that the gap between the age and mileage profiles is being squashed.

This is symptomatic of a late plate oversupply and must be monitored closely in the coming months.

To summarize, the used car market during October has been a little better than was anticipated given the political position and Brexit progress.

It is clear that the automotive industry is faring better than the retail sector as a whole which is great news and long may it continue.

However, there are clouds on the horizon in the form of oversupply of late plate petrol cars and a clear indication that the volume of 2 and 3-year-old ex PCP petrol product is also on the increase and this will have a negative impact on pricing going forward.

The market is shifting once again and as we head into the darker slower months of the year expect consumers to tighten their belts and divert funds to the festive season as usual.

With market conditions continuing to change by the top-quality up to the minute commercial data identifies market variations quicker than any other data provider and will be vital to ensure modern automotive organisations are in a position to make the most effective strategic decisions.

City Auction Group’s research has shown that its buyer app has an estimated value of over £40m, with used car purchases surging to 4,000 units.

The AA’s used car website reveals that sales of the Focus and Fiesta have topped all other models in the past three years.

Arval offers used cars at 20% off through Re-Lease

Arval is offering low-mileage used vehicles through its Re-Lease product for 20% less than an equivalent new model.