The streetlight charger mirage: why we need to shift discussion around electric vehicle infrastructure 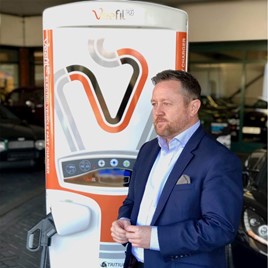 It’s clear that the ubiquity of battery electric vehicles (EVs) is inevitable, and the data suggests mass uptake is closer than we think: registrations of EVs in the United Kingdom are up 122 per cent this year.

Auto industry commentators are increasingly discussing the EV future in the United Kingdom nowadays, citing improvements in affordability and infrastructure as the key drivers to uptake.

Among those oft-cited improvements in infrastructure is the Government’s plan to install an additional 1,000 streetlight chargers across the nation for £2.5m, while the vehicles themselves are becoming increasingly affordable in line with the evolution of the vehicle’s most expensive part, the battery, which is becoming much more efficient to manufacture.

But this is just half the picture, one which ignores what EV drivers actually require.

Most discussions centring around infrastructure in the UK repeatedly cite the aggregate number of chargers on our roads or in shopping centre carparks, for instance, in an effort to highlight that EV infrastructure is now available widely.

Yet what is rarely, if ever, discussed is the actual power of the charger i.e. how fast a typical charger can charge a vehicle. And it is the charger’s speed which is the critical piece in the EV infrastructure puzzle.

The government can roll out 1,000 streetlight chargers across Britain, but if these chargers are used the way most people charge their vehicles in public, charging from a lamp post will barely register a blip on the average EV battery.

Lamp post chargers are ideally suited for “slow, through the night” charging, where the vehicle is plugged in for many hours.

These will max out at about 3.6kW of charging – that may not mean much to the average person, but when we put it into the context of how long it will take to charge the average EV, the lack of power this entails is striking.

For every 10 minutes of charge, a 3.6kW lamp post charger will add just over two miles of range.

If we expand the numbers, it will take more than 90 minutes to add the amount of range that drivers in the UK commute on average every day – about 20 miles, according to the Department of Transport.

But who has 90 minutes to spare to gain just 20 miles of range?

For some drivers this will address the issue of a lack of off-street parking (where drivers charge in their own garage or carport overnight), assuming they can find a parking spot near an equipped lamp post, of course.

But there remains a massive issue: that being, the lack of faster public charging coverage.

For those in need of a quick charge, such as fleets or taxis and those drivers who undertake significantly longer-than-the-average daily commute, streetlight chargers will be simply too weak to be relied upon for anything beyond through-the-night charging.

As commentators have discussed, the infrastructure availability is important as it goes a long way to addressing the larger concerns people have when it comes to deciding whether to purchase an EV or not: that is, where can they charge?

But just as pressing is the follow-up question: how long does it take to charge?

Unfortunately, discussions around the number of chargers only tell half the story and generally lack the finer details around what these chargers can do. In this case, performance of charging stations is far more important than proliferation.

Compare a streetlight charger’s power to the following:

The UK can roll out an infinite amount of streetlight chargers and it will never address the biggest issue facing EV drivers, an issue which will slow or stifle EV uptake across the country: people considering purchasing an EV fear being stranded with nowhere to charge.

Or they fear being stuck charging from a wall socket during an emergency, having to wait too long to get enough range to get to where they need to be.

It’s simply unreasonable to rely on a network of streetlight chargers - in which drivers need to charge for 90 minutes to get just enough charge to undertake the average commute - to address the primary blocker to mass EV uptake.

Boris Johnson’s pre-election promise to provide £500m to install a rapid 50kW charging network with a charger located within 30 miles of each citizen is more to the tune of what needs to happen to ensure the incoming wave of EV drivers are able to capably and regularly charge their vehicles.

Time will tell if this plan will come to fruition, but at least it’s now part of the discussion.

As a nation, from the government to the media, we need to look at the chargers we are rolling out as infrastructure, and consider factors such as what certain chargers can do, where they are ideally placed, what funding is needed and how quickly these chargers can add range.

Otherwise, the UK will be left with a lot of expensive and ineffective chargers.

All major parties commit to speeding uptake of EVs