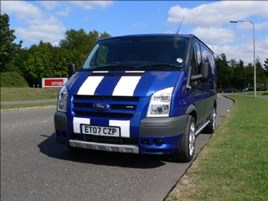 Just how sexy can a panel van get? Not much more than this, I reckoned after a week with the dazzling Ford Transit Sportvan.

The jazzy white stripes on the front shout ‘don’t mess with me’.

The alloy wheels clad in low profile 235/45 tyres scream ‘look at me’.

We were only surprised that there weren’t flaming wheelarches on offer as a paid-for extra.

It’s a powerful package. For £18,750 ex-VAT, you get a standard front and rear spoilers and side skirts, 18in alloys and low profile tyres, mean-looking twin exhaust pipes, a unique colour (performance blue) and ‘go faster’ white stripes on the front.

Inside, air-con comes as part of the package, along with cruise control, a leather-wrapped steering wheel, a CD/radio with steering column-mounted controls and remote central locking which opens the front and rear separately.

On the safety front the Sportvan gets driver and passenger airbags, ABS brakes, ESP traction control and a Quickclear front windscreen.

It all sounds more like the spec sheet from a Mercedes-Benz car than a Ford van.