Was this article useful?
Click the thumbs up >
AS THE first examples of the new Volkswagen Crafter begin to hit Britain’s roads, one thing is for certain – you won’t miss them.

See one coming towards you and you may be forgiven for thinking that a giant runner bean slicer is about to devour your car. Get a glimpse of the Crafter in your rear view mirror and you could well mistake it for a 40-tonne truck.

The Crafter has such a commanding presence on the road that it demands – and invariably gets – attention. And it’s no accident either.

The Crafter comes off the same production line as the Mercedes-Benz Sprinter but Volkswagen set out to make it look as different as possible from its twin brother.

So while the rear ends are the same, Volkswagen eschewed the Sprinter’s rather stylish and somewhat delicate front end and substituted a huge conk that looks both brash and brutal. Or in the words of one VW media man: ‘The Crafter looks strong and confident and has a striking and unmistakable look. It is built to work and shows it.’

The Crafter is a replacement for the ageing LT and comes at an exciting time – Volkswagen has just overtaken Citroën to take third place in the UK van sales charts. New director of commercial vehicles Robert Hazelwood is confident that with the Crafter now on sale, that lead over the French rival will be maintained.

Maintenance costs are reckoned to be 30% lower than for the old LT and insurance groups are lower than for the equivalent Sprinters, thanks to a better alarm. Prices are maintained or lowered over the LT and range from £15,869 to £28,724, ex-VAT. 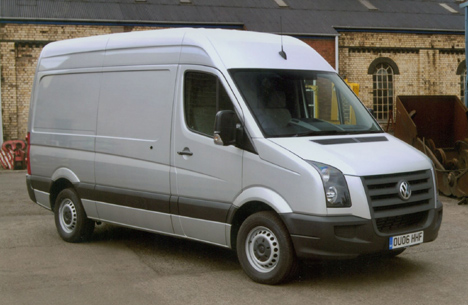 On the road
I HAD already driven the Crafter in Germany, in left-hand drive format, but finally got my claws on a British model at the UK launch at Goodwood – a mwb high roof 107bhp model weighing in at £20,800, ex-VAT.

Firstly, let’s get the question of the Crafter’s curious looks out of the way. At first I hated it – now I love it. It takes some getting used to but you’ve got to admire Volkswagen’s brave stance. And, by the way, it looks much better in the metal than in print.

Climbing aboard, the cab seems huge compared to the old LT. It’s light, airy, comfortable and spacious and has a plethora of new conveniences for the driver such as cola bins, numerous cup holders, a document clip, overhead storage and even a middle seat which folds down to reveal a handy desk.

The driver’s seat is firm and supportive and – great news – the two passengers seats are equally good.

In my view, too many vans have uncomfortable passenger seats.

In the back, things are much as they were in the old model. Our van had no fewer than 10 load-lashing eyes and a plastic non-slip floor, which is a £375 option and well worth it.

My only grumble in the load area is one that affects just about every van I test – why the pathetic little interior lights? Anyone wishing to load or unload this van in the dark will need more than the illumination these two little items give out.

On the road, I felt immediately at home driving this van. It may be six metres long but for all the world I could have been behind the wheel of a large car.

The 107bhp is likely to be the biggest fleet seller and manages to offer enough power without being too silly. With a half load on board, the Crafter didn’t exactly fly along and on a couple of occasions I found myself praying for a bit of extra oomph, but with that 206lb-ft of torque there was never a suggestion that the engine couldn’t cope, even on steep inclines.

Volkswagen puts a fuel economy figure of 34.9mpg on this model, but it’s measured with the van empty and travelling at a steady 50mph. I’d say a figure in the high twenties would be more likely, which still isn’t bad for a vehicle of this size.

Verdict
A TRIUMPH of design and engineering in my book – and a quantum leap forward over the LT. I’ll be interested to see over the coming months whether Volkswagen can steal sales from the Sprinter and consolidate that number three position in the market.