Was this article useful?
Click the thumbs up >
August maintained its reputation of being the quietest month for new car sales as buyers held off for this month’s plate change.

However, the Society of Motor Manufacturers and Traders (SMMT) believes the market will still reach its prediction of 2.355 million units this year.

Obviously much will depend on September’s sales performance – a month which accounts for 17% of all new car sales in the UK.

Diesel sales continued their upward trend, with August being the sixth consecutive month of growth. Diesel penetration is now running at 41.4%, up from 38.9% in August 2006. 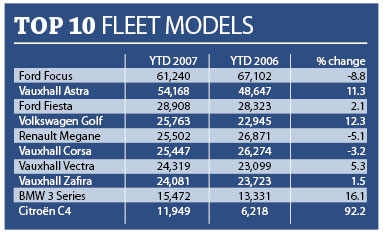 Christopher Macgowan, chief executive of the SMMT, said: “Since the introduction of the twice-yearly plate change, August has vied with February for being the smallest volume month for new car registrations.

“While the overall market is stable, demand for diesel cars continues to climb as buyers seek optimum fuel consumption and lower CO2 emissions.”

In fleet, the Ford Focus remains the best-selling model, despite a near-9% drop in registrations, while Vauxhall’s Astra remained in second with an 11% increase in sales. Ford also held on to the manufacturer’s title, despite drops for the Focus and Mondeo.

However, storming sales of the Galaxy and S-MAX MPV twins have shored the firm’s sales.

Vauxhall, in second, saw a drop in sales for Corsa, but Astra and Vectra both grew in registrations.

Volkswagen, in third, saw fleet sales rise by 6% thanks to demand for the Golf, Jetta and Passat, offsetting a fall in Touran sales.

Elsewhere, Nissan reached the top 10 thanks to strong demand for the Note and Qashqai, plus Pathfinder sales rising by a third. Honda put in another strong performance with Civic sales up by 39%, Accord up by 15% and CR-V sales increasing by 15%.