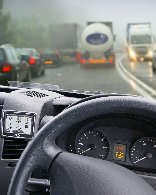 Patented contactless engine management technology (CANbus) developed by Masternaut recognised a fault in the vehicle’s antilock braking system (ABS) and electronic power steering (EPS) and reported that both of these critical systems were displaying warning lights. This alerted the service engineer - who had been ignoring the warning lights - to the potential failure allowing the vehicle to be stopped and recovery arranged.

“This is a cautionary tale for fleet operators and shows that an investment in technology is worthwhile. Drivers often ignore warning lights assuming that these are simple electrical faults and have no bearing on the safety of the vehicle. We were able to prove that the Masternaut data was accurate and on further investigation we were able to show that these two faults had existed for some time. The addition of safety alerts and highly detailed reporting complements the vehicle tracking system, adding a further dimension in accuracy and intelligence,” says Martin Port, managing director of Masternaut.

In another incident involving a broken down vehicle that was not fitted with CANbus, the truck caused a two hour traffic jam following catastrophic brake and clutch failure. Had the tanker been fitted with a CANbus linked to a vehicle tracking system, the depot would have been aware of the vehicle’s transmission and brake faults before it was filled and dispatched. These kinds of problems, which are potentially dangerous for road users, often go undetected but the CANbus system pinpoints them and allows action to be taken instantly.