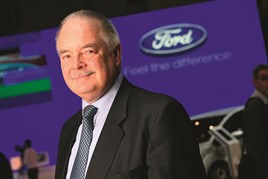 Ford is in buoyant mood after CAP set a positive residual value forecast for what will probably be the biggest selling fleet car next year - the new Ford Focus.

“The new Focus takes a car that was already superb and manages to improve every aspect. It could be argued that it is almost too good for the C Sector and it is fair to say a driver could downsize from something like an Audi A4 and have no issues at all with the Focus,” said CAP Monitor editor Jeff Knight.

However, CAP points out that the Focus’s percentage RV is “misleadingly low” because it takes into account a large price increase from £17k to £18,500. “This takes the C sector into genuine executive territory,” said Knight.

Following CAP’s positive RV for the Focus, Ford was similarly buoyed by the improved RVs given for the new C-Max and Grand-C-Max compared to current versions.

These positive RV forecasts will not benefit all fleets, says Ford.

“In terms of large fleets, we’ll be reducing the discounting by the amount of the RV improvement,” said Nigel Sharp, managing director, Ford of Britain.

“In other words, the holding costs will stay static for the big part and we’ll be reducing the absolute level of discounts.”

However, for smaller fleets there will be savings after Ford suggested it won’t reflect the full RV increase in its pricing.

To check out the latest Ford car reviews, come to the Fleet News car reviews section.