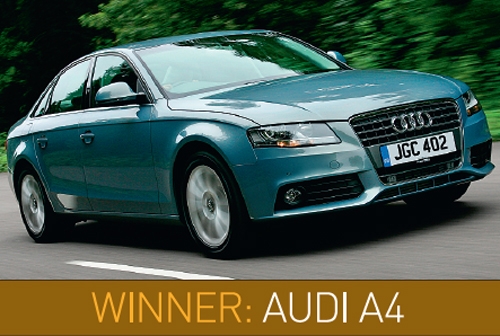 The Audi A4 has been named the Best Large Premium Car at the 2010 Fleet News awards.

The Audi A4 has become one of the most desirable cars in its highly-competitive sector. With running costs among the best in class, Audi has also introduced fuel-saving, CO2-reducing technology on many versions of the range during 2009.

Audi was first to offer a car in this sector with CO2 emissions under the 121g/km threshold, meaning it falls into the lowest benefit-in-kind tax band for diesel.

The A4 is also a class benchmark for build quality with the most impressive interior finish in the cabin. It is also roomy, with more interior space than premium rivals, while the Avant is a competitive load carrier with a dash of style.

Judges’ comments
This category provoked more heated debate than any other. Fleet criteria saw the A4 just edge the 3 Series. The addition of stop-start technology helps drivers to reduce their tax liability while reducing fuel consumption and, therefore, fleet costs.

The BMW 3 Series was highly commended by the judges.