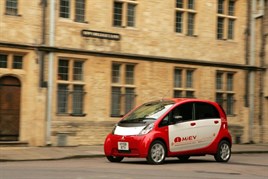 Mitsubishi is hoping to cut the retail price of the i-MiEV by up to £10,000 because one of its key rivals is so much cheaper.

In March the Japanese firm revealed the electric city car would cost £38,699. But two months later Nissan announced its EV, the Leaf, would be just £28,350. Both would qualify for a £5,000 EV discount from the Department for Transport, though that’s currently being reviewed by the new Government as part of cost-cutting measures.

Now Mitsubishi UK bosses are working hard to make their vehicle more competitive. Paul Flint, used vehicle manager, said: “Conversations are going on between our MD and the factory in Japan to try to realign the price. What we are asking for and what we will get are two different things, but we are asking for it to be as close to Leaf as possible.”

He explained sales were in limbo until that decision was made, adding “we expect positive news any day and we will make an announcement”.

Fifty i-MiEVs are in Britain at the moment, half with the fleet departments of Birmingham and Coventry councils and half with various London boroughs.

Read our blog on living with the Mitsubishi i-MiEV here.