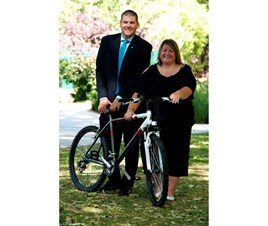 London-based fleet coordinator Louise Haigh received an unexpected surprise when she attended the Greener Company Car in Action Day (GCCIA) 2010 after entering a competition at the Škoda stand.

In addition to demonstrating their range of cars at the Fleet News two-day event, Škoda hosted a competition to win a mountain bike as part of their ongoing sponsorship of the Team Raleigh cycling team and Haigh was the lucky recipient.

She attended the event in her role as fleet co-ordinator for the Salvation Army and in between testing new models to add to their 700-strong fleet, which currently includes the Škoda Octavia, she found the chance to win a brand new mountain bike far too good an opportunity to miss.

“When I found out that I’d won I was initially so surprised I thought it was a joke, but I’m really looking forward to using the bike now and can’t wait to take it down to the docks to give it a test run,” said Haigh.

Škoda announced its sponsorship of Raleigh earlier this year. Having originally made its name in the production of bicycles in Czechoslovakia in 1895, when founders Vaclav Laurin and Vaclav Klement created and sold their first bike, Škoda felt that sponsoring a bicycle manufacturer like Raleigh was an excellent brand fit.

Robert Morris, fleet sales manager for London and the South East, who presented Louise with her bike, said: “The Raleigh brand is a great name to be associated with and there was a lot of interest in the competition at the Greener Company Car in Action day. We hope that Louise enjoys her prize and continues to be happy with the range of Škoda models that she uses in her fleet.”