Fleets should be bracing themselves for a future hike in taxes as the Government fights to maintain its tax take from the industry.

Figures from Her Majesty’s Revenue and Customs (HMRC) reveal that tax receipts from company car tax have fallen from £1.68 billion in 200/03 to £1.25 billion in 2008/09, the last tax year for when figures are available.

The figures clearly show a downward trend in the amount of cash the Government is collecting from fleets.

However, it has been able to adequately deal with the shortfall thanks to the amount of money it takes in fuel duty steadily increasing from £21.916 billion in 2001/02 to £27.256 billion in 2010/11.
Fuel duty increases have clearly played their part in this increase, despite the Government reducing fuel duty by 1pence per litre (ppl) in March 2011 and deferring the April 1 increase until January 2012, when the fuel duty rate will increase by 3.02ppl. 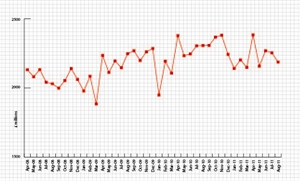 Nevertheless, company vehicles are becoming more economical and covering fewer miles, according to figures from Fleet200.

Analysis of the UK’s biggest fleets reveals that the average vehicle is travelling 15,914 miles per year, down from 16,772 miles the previous year.

In addition, average emissions have fallen from 143g/km in 2010 to 140g/km in 2011, as employees look to save money by choosing more fuel efficient cars.

“This has supported companies, and their drivers, in selecting tax efficient company vehicles that are fit for purpose.”

“Looking ahead to the next five years, we expect the UK market to be dominated by fuel efficient vehicles as a result of an increase in environmental awareness, consumer efforts to reduce motoring expenses and tax legislation – strongly shifting the balance to lower emission vehicles.”