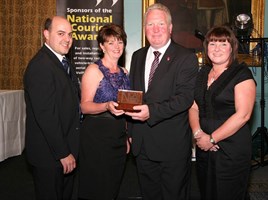 The award was primarily in recognition of City Link’s Don’t Look Away campaign – an initiative encouraging every employee to log even the most minor of hazards or accidents in the workplace.

The company has hailed the campaign a major success – in the first eight months alone more than 1,000 incidents were reported. For every hazard ‘reported and sorted’ City Link donated £1 to its chosen charity, the Make-A-Wish Foundation.

Also in a bid to prevent accidents in the workplace the company appointed an outside training company to work with its forklift truck drivers on novice or refresher courses which work towards an NVQ in Plant Operations – which places a firm emphasis on health and safety.

To date, more than 326 City Link fork-lift truck drivers from depots across the country have undertaken the course.

Presenting the award, transport minister Mike Penning said: “This is a well-deserved award and represents steps to safety at its highest level of the industry.”