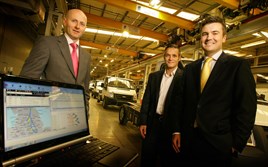 The company behind a scheduling system for electric vehicles has secured an investment of £500,000 from the Finance for Business North East Technology Fund, managed by IP Group, to help achieve its expansion plans.

Route Monkey has, over the past six years, developed the scheduling system for electric vehicles, which is initially being targeted at commercial vehicles and fleets.

The system helps fleet managers identify the best vehicle for every delivery or collection, helping to remove range anxiety and improve their return on investment.

And as well as securing the investment from the fund, Route Monkey has struck a strategic partnership with Smith Electric Vehicles, to supply its technology to the commercial electric vehicle manufacturer.

Route Monkey - which provides software solutions for vehicle operators, such as routing and back office solutions - is using the investment from the fund to concentrate its focus on the electric vehicle market, and to open a new office in Newcastle in addition to its base in Scotland. It is also looking at expanding its software product portfolio, again with particular focus on the electric vehicle market.

As the business grows, it plans to recruit more software developers and add further sales resource to its team, creating new jobs in the region.

Longer-term, the business is looking to break into the United States and to establish a re-seller network in territories including South Africa and Ireland.

Colin Ferguson, chief executive of Route Monkey, said his aspiration is for the business to be the “de facto scheduling provider in commercial electric vehicles” and that the partnership with Smith Electric Vehicles, based in Washington, Tyne and Wear, is a second major boost for the business, following the investment.

“We came up with the concept in 2006/07, and took it to market in 2009. Since that time, we have been relatively successful, becoming a niche software provider which turns over a seven-figure sum, all of which has been done under our own steam, with no investment,” he said.

“I am confident that with this support from IP Group, which we are extremely grateful for, we can take Route Monkey to another level. We are looking to export and expand into new areas internationally, and are able to look at doing that with a much more aggressive strategy than before.

“We are proud to be putting down roots here in the North East, and as our product portfolio and company grows, the new jobs we create will be here in this region.”

“Fundamentally this is about electric vehicle asset management; EVs have a defined daily range capability. RouteMonkey helps fleets maximise the asset by utilising as much of that mileage as possible. The more miles the EV drives each day, the better the return on investment.”

Ian Wilson, investment manager at IP Group in Newcastle, said: “Route Monkey is an outstanding business, which has positioned itself well to take advantage of the many opportunities in the electric vehicles sector, which will undoubtedly be a real growth area in months and years to come. Its partnership with Smith Electric Vehicles is testament to the strength of its product.

“The North East already has a global reputation for its work in electric vehicles, and I am confident that Route Monkey will become an established name in the industry before too long.”