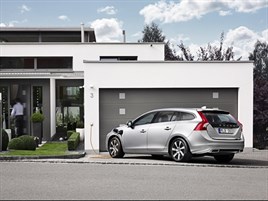 The guideline price of the V60 Plug-in Hybrid is starting at between £45,000 and £50,000 in the UK, minus any government subsidy for electric cars (Plug-in Car Grant), with with a limited model year production run of 1,000 cars starting in November 2012.

"Our plug-in hybrid has received considerable attention since it was unveiled at the Geneva Motor Show in 2011. Now we're taking the next step by presenting the production model, which is graced with a distinctive profile featuring a spectacular silver colour, an exclusive interior and generous standard equipment," said Stefan Jacoby, President and CEO of Volvo Car Corporation.

About 30% of total volume will go to Sweden and the other Nordic countries. Germany, Switzerland, Belgium, France, the Netherlands and the UK will have a share of between 5 and 15% each.

"We expect the order books to fill very quickly. The most discerning customers have many exclusive cars to choose between. But for anyone who truly wants to be in a league of their own behind the wheel of the most ingenious car in the world, there's only our V60 Plug-in Hybrid," said Jacoby.

The front wheels of the V60 Plug-in Hybrid are powered by a five-cylinder 2.4-litre turbo diesel producing 215 hp and maximum torque is 325lb-ft.

The rear axle is powered by an electric motor producing 70 horsepower. The electric motor is supplied with power from an 11.2 kWh lithium-ion battery pack installed under the floor of the load compartment.

The driver selects the required driving mode via three buttons that give the car three entirely different temperaments: Pure, Hybrid or Power.

The driver can choose to save battery power in order to drive on pure electricity later on, for instance in an urban green zone or in the heart of a city.

The aim is that the Save mode should ensure there is sufficient battery power for about 12.5 miles of driving on electricity alone.

However, owing to the electric motor's lower power, torque to the rear wheels is limited and four-wheel drive is active up to 75mph.

When four-wheel drive is activated, the diesel engine operates continuously and the generator ensures that the charge level in the battery pack is sufficient to supply the rear axle with the necessary power.