CPP deal to buy Spyker not to include Saab 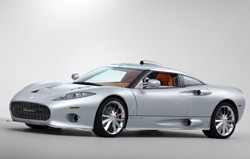 The Dutch company currently operates the Spyker and Saab Automobile businesses, but Saab will remain under its ownership.

The purchase price would be 32 million Euros, 15 million Euros of which would be paid immediately upon the finalisation of the deal, with the remaining 17 million Euros to be paid over a six year ‘earn-out’ period.

CPP has a workforce of 250 specialist designers, technicians and craftsmen and over the past 16 years its founder and managing director Brendan O’Toole has grown the business continuously.

However, with the partnership and support of Vladimir Antonov this growth has accelerated within the last two years.

CPP will structure Spyker’s assets into a new subsidiary company, to be based at CPP’s Coventry headquarters.

It has produced chassis and body panels for Spyker since the brand’s re-introduction in 2000 and in 2009 it signed an agreement with Spyker to undertake full vehicle production of the C8 Aileron and all future Spyker models at a new and dedicated facility in Coventry.

O’Toole said: “This acquisition is very positive news for everyone connected to Spyker. We’re absolutely confident that independent ownership will enable us to rapidly progress an invigorated business plan, to which CPP is fully committed.”