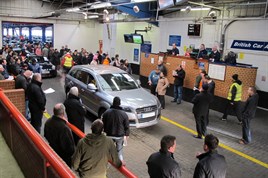 The latest price data from BCA shows that diesel cars continue to enjoy a substantial price premium over petrol models, despite the fact that diesel cars are sold at a higher average mileage.

The premium narrowed at the start of 2009 but has widened again in recent months and in January 2011 was as wide as it ever has been at over £1,600.

Tony Gannon, BCA communications director, said: “There can be little argument that the average price of a diesel car always outperforms that of a similar average petrol model.

"Research from BCA’s Pulse report on high volume ex-fleet and lease cars shows there is a clear and significant difference in average value at remarketing time – as much as £1,616 in January 2011 – equivalent to a 32.3% variance or nearly a third more on average.”

Gannon commented “Another area where fleet & lease petrol and diesel diverge quite sharply is in the mileage at remarketing time. For petrol cars it is around 30,000 miles, for diesel cars, quite often double that figure.”

Gannon concluded: “What is certain is that there are a number of factors affecting the relative price performance of the two fuel types in the used car market. The price paid by motorists at the pumps is significant, and will affect desirability. But motorists don’t consider this in isolation – our research for the Used Car Market Report shows that they also value diesel’s perceived relative economy in terms of mpg and lower servicing costs.”