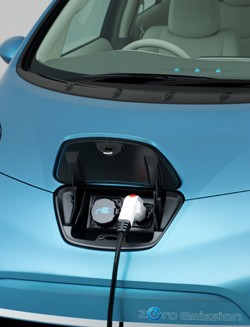 Fourteen people today took delivery of a 100% electric Nissan LEAF each as part of their participation in Switch EV, a major electric vehicle test drive in North East England.

The Switch EV project, which began in September last year and involves several other automakers, is one of eight UK projects supported by the Technology Strategy Board’s £25m Ultra Low Carbon Vehicles Demonstrator Programme and is aimed at accelerating the widespread adoption of electric vehicles in the UK.

These 14 drivers will use the five-seater vehicle as their own car for six months to experience and report on life with an electric car.

The Nissan LEAFs were handed over to the participants in a ceremony at the Nissan Sunderland Plant in the presence of UK Minister for Business and Enterprise Mark Prisk MP, who also received a tour of the production facilities where the Nissan LEAF will be manufactured from 2013.

Prisk said: “The UK Government has set a clear ambition of placing the country at the global forefront of low and ultra low carbon vehicle development. Nissan in Sunderland has taken up the challenge.

“Today I’m delighted to hand over the keys to these 14 Nissan LEAFs so people can experience and feedback valuable information on what it’s really like to drive an electric car as part of the largest project of its kind in the world.”

Trevor Mann, Nissan Senior Vice President for Manufacturing in Europe, said: “Today marks a major milestone in the advancement of electric vehicles in the UK. Up to now Nissan has only been able to allow limited access to the zero-emission Nissan LEAF – but today we are handing over 14 cars to members of the public for six months.

“The drive home today will be enough for these drivers to realise that driving the Nissan LEAF does not mean they have to compromise on driving experience or performance.”

The 14 participants are among the first people in Europe to drive the award-winning car. Earlier this week, Nissan began deliveries of Nissan LEAF to UK customers.

A fifteenth Nissan LEAF will be added to the Switch EV project in the coming weeks. After six months these Switch EV LEAFs will pass to a new group of people to experience life with an EV. More than 150 people are expected to test a total of 49 new, all-electric vehicles from different manufacturers during the Switch EV project. Bespoke data collection units have been installed in each vehicle to provide data, including the effects of road topology and congestion on the range of the battery, which is expected to aid the development of electric vehicles.

The Switch EV project is being rolled out alongside the installation of a comprehensive EV recharging infrastructure in the North East as part of the UK’s Plugged in Places scheme, which will see 1,300 regional charging points installed in the region by 2013, including domestic charging units, on-street charging posts and quick chargers capable of providing a 0-80% charge within 30 minutes.