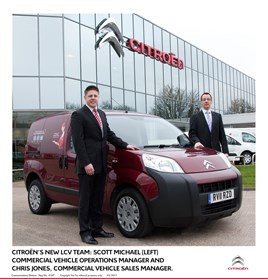 With immediate effect Scott Michael has been appointed as Citroën’s commercial vehicle operations manager, reporting to Martin Hamill, head of commercial vehicles and business sector. Scott replaces Robert Handyside who has been promoted within Citroën to the Paris-based position of B2B development manager.

Scott takes up his new role after three years as Citroën’s Commercial Vehicle Sales Manager. A Business Studies and Spanish graduate of Hull University, Scott has been with Citroën since 2003. During his service with Citroën he has worked as a fleet analyst and an area fleet sales manager, before becoming commercial vehicle sales manager in January 2008.

Reporting to Scott, Chris Jones has been appointed to the position of commercial vehicle sales manager. During his 21 years’ service with Citroën, Chris has worked in a wide range of fleet and commercial roles. He takes up his new position after four years within Fleet Services.

Scott commented: “It is both an exciting and challenging time to take up my new role. Citroën has embarked on the roll-out of its Euro 5 engine programme, which coupled with other new product developments, will ensure that the Company is offering one of the most technically advanced and competitive LCV ranges available. I look forward to continuing and developing the work started by Robert and the team, to ensure that Citroën maintains and expands its business in the highly competitive UK LCV market.”