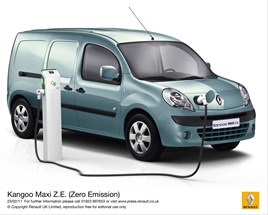 Following on from last year’s record 2010 UK LCV sales, Renault will be showcasing at this year’s CV Show at the NEC Birmingham, with no less than seven UK show debuts, including the fully-electric Kangoo Van Z.E. (*Zero Emission).

Renault will have one of the largest presences at this year’s event, with a stand more than twice the size of last year’s.

Unsurprisingly, against a backdrop of ever-increasing fuel prices, Renault is expecting the largest draw on its stand to be its new Kangoo Van Z.E. (Zero Emission), taking in its first UK show next month. Aiming to prove that electric LCVs can be affordable to run, good to drive, as well as offer a more relaxed driving environment, due to its near silent operation, the French brand’s compact vans will be available from Autumn this year in both two- and five-seat versions.

Emphasising the growth of Renault’s fully renewed LCV range ahead of their UK launches in the second quarter of 2011, will be several new additions to the Master range. Namely, four factory-built products – Box Van, Dropside, Tipper and 17 Seat minibus, plus two locally converted products - Luton Van and Curtainside.

Commenting on the array of new Renault products on show, fleet and commercial vehicle operations Ddirector, Darren Payne, said, “We’ve made no bones about our ambitious plans to increase our share of the UK conversions market to 8% in the months ahead. Our wealth of new models on show underlines that message, and I’m equally pleased to be showing Kangoo Van Z.E., the first affordable factory-built electric van in the UK. We truly believe we have something for everyone and I’m genuinely looking forward to seeing customer reactions to our expanded range in a few weeks time.”