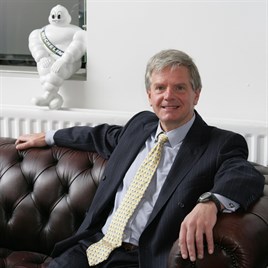 Phil Baldock, 51, has been appointed head of communications for Stoke-on-Trent-based Michelin Tyre plc, with responsibility for the UK and Ireland. He replaces Peter Snelling, who is retiring after six years in the role.

Baldock started his career as a mining engineer for British Coal, before moving on to become a colliery overman at Hem Heath Colliery. He left in 1988 to join Costain, spending three years working on the Channel Tunnel project.

Baldock also brings significant experience within Michelin, having joined the Company as a sales representative in 1992, working with truck fleet customers for 3 years. He progressed into a marketing role, as marketing manager for the new multibrand operation, before being appointed the first key account manager for the car product line in 1998.

Later posts included 5 years as commercial director for Michelin’s earthmover and industrial division, followed in 2007 by three years as distribution development manager, where he managed Michelin’s independent truck tyre dealer network. Since July 2010 he has been working as a project manager within the communications team, with direct responsibility for Michelin’s double centenary celebrations, held at London’s Michelin House during January 2011.

Commenting on his appointment, Baldock says: "After 18 years in sales and marketing it is a privilege to be appointed Head of Communications. It is a very interesting time for the business as we are tackling major issues such as the rapid growth of the cold weather tyre market, plus preparing for the introduction of tyre labelling in 2012. These are major issues for the industry, and ones where communication is playing a key role; helping motorists to make more informed decisions when buying tyres.

“Additionally, Michelin remain by far the largest player in the UK tyre manufacturing industry, with production facilities in Ballymena, Dundee and Stoke. We’ve got strong growth ambitions for next five years, and I’m looking forward to being part of that success”.