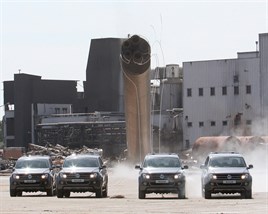 Volkswagen has demonstrated the impressive power of its new pick-up truck by using it to demolish a 67-metre high steel chimney weighing approximately 140 tonnes and standing at nearly the same height as Westminster Abbey.

The chimney would normally have been demolished using a 40 tonne excavator, but after months of careful planning from structural engineers and demolition experts EDS, the Volkswagen Amarok was given the opportunity to be the first pick-up to attempt such a task.

A series of tests were developed to challenge the power and traction delivered by the Amarok. The structure was prepared using a standard procedure for any ‘pull-down’ demolition of flame cutting a ‘shark’s mouth’ into the base of the chimney, reducing its structural integrity, though ensuring that it remained free standing.

Four 200-metre lengths of rope were rigged to the top of the chimney and attached to the towbars of four standard Amarok pick-ups, each with Volkswagen’s latest four-cylinder, 2.0 TDI engine producing 163bhp. For this demonstration they were fitted with a ‘quick release’ safely mechanism for the towing ropes, ensuring the safety of the stunt drivers in the unlikely event of the structure falling in the wrong direction.

At the chosen time of demolition, the Amarok pick-ups simultaneously, and impressively, pulled the chimney crashing to the ground as part of a planned site demolition project in Reading, Berkshire.

Simon Elliott, director, Volkswagen Commercial Vehicles, said: ‘The new Amarok is packed with power and intelligence, and we wanted to achieve something extraordinary to demonstrate this for its launch. Working with the right experts and taking a scientific approach, by demolishing a 67-metre steel chimney we’ve shown the maximum strength and power of the Amarok.’

Eldon Stevens from worldwide decommissioning experts EDS was delighted to be part of the dramatic demonstration: ‘EDS has a reputation for taking on highly complex demolition projects that really test our engineering abilities, so we were thrilled to work with Volkswagen Commercial Vehicles to see if the new Amarok could bring down such a vast structure. Thankfully our combined skills were up to the challenge!’

The Volkswagen Amarok is officially launched and in showrooms from Monday 9 May. The Amarok is available as a four door doublecab in three trim levels, with on the road prices starting from £21,343 (inc VAT).