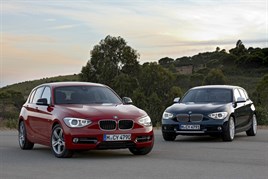 BMW has Ford and Volkswagen drivers in its sights for the next version of its smallest car.

Longer, wider and substantially larger inside, the second-generation 1 Series has been planned to appeal to Focus and Golf owners who want more upmarket transport.

But the new five-door model will also represent the German company’s long-awaited response to its major rival in the compact premium sector when it is unveiled at the Frankfurt Motor Show in September.

"We have been outsold by the Audi A3 Sportback in the past because it was considered to be the bigger car. That is no longer the case," said product operations manager James Morrison.

Speaking at a preview of the sports hatch model, he told Fleet News: "Our current car has been a huge success and has achieved 130,000 registrations since it was launched in 2004. But major criticism have centred on interior space, so we have listened to our customers and responded with a product that provides a lot more room in the rear."

Despite retaining design cues from the original car, the new model boasts a more modern frontal treatment with angular headlamps, a larger glass area and restyled rear doors that allow easier access. Significantly, a 30-litre increase in boot space gives it a greater luggage volume than the Golf.

"We’ve upgraded the interior to create a more premium feel – the 1 Series has now grown up and we think it will have a broader base of appeal," said Morrison.

Due on sale on September 17, the revised range will feature revised versions of current petrol and diesel engines and will include a high-economy 1.6-litre EfficientDynamics model offering 99g/km emissions.

Sport and Urban trim levels will be added to the ES and SE model structure and BMW will claim the new range gets closer to achieving official economy figures in everyday as well as being the fastest and cleanest in its segment.