Changes to senior management at Subaru 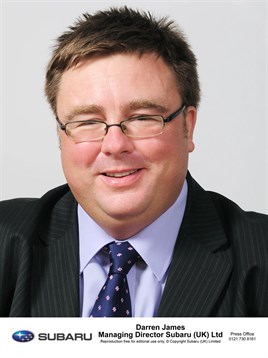 International Motors, distributor for Subaru and Isuzu vehicles in the UK, has announced changes to its senior management team in its Subaru business in readiness of a busy launch period.

Darren James has been appointed as managing director Subaru (UK) from his previous role of director parts and service. Darren, 41, has been with the company for over 20 years.
Of his appointment, Darren said: “I am enormously excited by the opportunity of steering the Subaru UK business in what promises to be a new phase for the Brand.

“We have some immediate challenges to face but we have some great opportunities ahead of us too with a number of new vehicles to launch, a fantastic dealer network and terrific Brand loyalty among our customers.”

Darren takes over from Paul Tunniclffe who is appointed to the newly created position of UK operations director. In his new role Paul heads up each of the three IM Group franchises at board level, and takes on responsibility for IM Group functions including dealer development, distribution and after-sales.

Both appointments take effect from August 1.

Subaru is entering into a busy period of new model launches over the coming 12 months, including entries into vehicle segments which are new for the Brand.

The launch phase begins with introduction of the C-segment XV crossover at the start of 2012, quickly followed by the launch of a new Impreza 5-door and then the Coupe in the spring.