First BMW handed to LOCOG for London 2012 is a bicycle 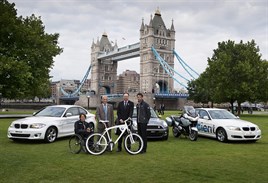 BMW Group has handed over the first vehicle to the London Organising Committee of the Olympic Games (LOCOG) to support the 2012 Games - and it's a bicycle.

Global sales and marketing director for BMW Group Ian Robertson handed the bike to David Stubbs, head of sustainability for LOCOG in central London, as the one-year-to-go point approaches on 27 July.

A total of 400 BMW bicycles will be used by LOCOG in the run-up to and during the games and will be part of a wide range of vehicles supplied by BMW Group, as a vital element of the company's Tier One sponsorship of London 2012. These different models have been chosen by LOCOG to meet the diverse operational needs of the games.

"Everybody will be travelling to the games by foot, bicycle or public transport where ever possible," said Stubbs, "and the LOCOG team will be no exception to this. It is rather fitting therefore that the first vehicle we accept for the 2012 fleet is a bike. However, cars and motorcycles remain a vital part of the transport arrangements to ensure the smooth-running and full operational support of the games."

Robertson explained: "The majority of the fleet will be made up of highly efficient diesel-powered cars, featuring the company's award-winning and industry-leading Efficient Dynamics technologies. This has allowed us to meet LOCOG's extremely challenging target of 120g/km of CO2, as an average across the fleet. Our success in the field of sustainable mobility has been recognised by the Dow Jones Sustainability Index, which has named BMW Group the world's most sustainable automotive company six years in a row."