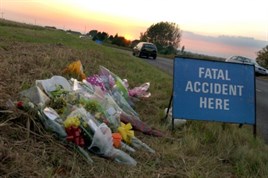 Latest road safety figures from the Department for Transport shows that compliance with 30mph urban speed limits continues to improve while pedestrian fatality levels are falling.

Pedestrian fatalities have also reduced significantly, down 40% since 2005 from 671 to 405, with 96% of pedestrian accidents happening on urban roads.

Reducing traffic speeds and risk in towns has been high on the road safety agenda, but rural roads, on which drivers are still most likely to be killed, now require even greater priority to reduce casualties further, says the IAM.

IAM director of policy and research Neil Greig said: “The good news is that drivers are not driving faster on the less crowded roads and more people are sticking to the limit in urban areas where there are many hazards. A combination of consistent road safety messages, new road layouts and police enforcement appears to be paying road safety dividends for city people.

“However despite this positive effect in urban areas, road safety on rural roads, where the majority of serious accidents and fatalities occur, needs much more attention. In the UK, between two-thirds and three-quarters of fatalities occur on rural roads, yet driving on rural roads still isn’t a mandatory part of the basic driving test. Most young drivers get plenty of exposure to urban hazards but often their first experience of a rural road comes after the test when they are on their own. This is unacceptable.”