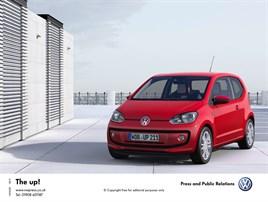 The first photos of the Volkswagen Up have been released, ahead of the new small car making its debut at the Frankfurt motor show in September.

The Up is an entirely new design, offering maximum space on a minimal footprint (3.54 x 1.64 m), making it ideal for driving in the world’s cities. It will be launched in Europe in December. There are three versions for different budgets and needs: take Up is the entry-level car, move Up the comfort-oriented model and high Up the top version.

Making its debut in the Up is a new generation of three-cylinder petrol engines, with outputs of 60 PS and 75 PS. Combined fuel consumption as a BlueMotion Technology version (including a Stop/Start system) is 4.2 l/100 km (60 PS), and CO2 emissions for this version are less than 100 g/km. There are also plans for an Up with electric drive.

An important new safety technology in the Up is the optional City Emergency Braking system. It is automatically active at speeds under 18mph, and uses a laser sensor to detect the risk of an impending collision. Depending on speed and situation, City Emergency Braking can reduce accident severity by initiating automatic brake interventions that can even avoid a crash.

At 3.54 metres in length and 1.64 metres in width and 1.48 metres in height, the Up is one of the smallest four-seater cars. Its overall length consists of short body overhangs and a long wheelbase of 2.42 metres.

The interior is as colourful as it is capacious, with either decor paint or body colour (depending on the equipment line) used in the interior, including across the dashboard facia.

For the first time in a Volkswagen, the maps + more system is now being offered, which is a mobile Personal Infotainment Device (PID). Unlike many other similar systems of this type, maps + more melds with the car’s network of systems more effectively: navigation, telephone and infotainment can be controlled and viewed via the maps + more touchscreen, which can also be used to view vehicle information, such as the display of the parking sensors (where fitted).