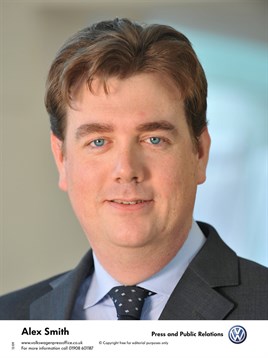 Volkswagen Commercial Vehicles has appointed a new director. Alex Smith, 37, who will take up the role on November 1, replaces Simon Elliott who recently accepted a new position as managing director of Volkswagen Group Ireland. Smith is currently head of retail operations for Volkswagen Passenger Cars.

He has a 16-year career in the motor industry and joined the Volkswagen Group four years ago. His previous roles include a spell as head of Group Parts Operations, where he was responsible for the Trade Parts Specialists network. Prior to this he worked for Ford and Kia with responsibility for operations, fleet, aftersales, planning and marketing.

Simon Thomas, managing director of Volkswagen Group UK, said: “We are delighted to appoint Alex to this new role and know that his previous achievements make him the best person to lead Volkswagen Commercial Vehicles during the years ahead.

“He is joining Volkswagen Commercial Vehicles during a year of record sales, continued investment and expansion of its Van Centre network, and with one of the most up to date model ranges in the industry.”

Smith said: “I am looking forward to joining such a leading and growing commercial vehicle brand with one of the most efficient model ranges, an impressive network of dedicated van centres, and staff providing the best service to fleet and private customers alike.”