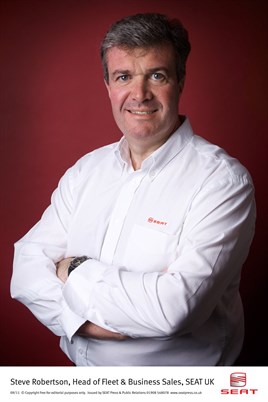 Seat continues to strengthen its leadership team with announcement of a key appointment in its Fleet and Business department, Steve Robertson is to take on the role of head of fleet and business sales following the recent departure of Nick Andrews.

Robertson moves from within the S Seat UK Management Team as since 2006 he has held the position of head of Marketing.

Aside from his extensive marketing credentials Steve, 51, has both fleet and dealer experience garnered from a 30-year motor industry career.

He said: 'I'm very pleased to be making this move across to Seat UK's successful Fleet & Business operation.

'With much good work already completed, it's a great time to be taking up the reins. We have a tremendous opportunity to really develop our fleet offering with an even more concentrated focus on customer care and service levels.

'I want Seat to become known in the fleet industry as the company that's easy to do business with - and I know our network of fleet specialist dealers nationwide are already working hard towards that goal.'

'Steve will bring his extensive motor industry experience to bear on this important part of Seat UK's business, and I have every confidence that he will lead the growing fleet team to significantly bigger and better things over the coming months and years.'

Meanwhile, former Seat UK head of operations Richard Harrison has been confirmed as the new group sales director for Seat S.A. with responsibility for the key Euro 5 European markets outside Spain: Germany, the UK, France, Italy and Portugal.

Richard, 43, spent four years heading up Seat UK's Operations team during which time he oversaw both a significant expansion of the dealer network and a major uplift in Seat sales. A separate announcement concerning both Richard's successor and the new Seat UK Head of Marketing will be made in the near future.

Peter Wyhinny said of the move: 'This is a great opportunity for Richard, and I'm very pleased that his talents have been recognised by our colleagues at Seat S.A. headquarters in Martorell.

'His intimate knowledge of the UK market will, I'm sure, bring significant benefits for the Euro 5 markets and I wish him all the very best in his new role in Spain.