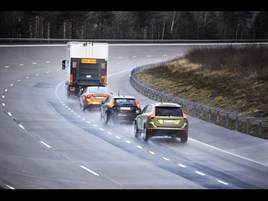 The SARTRE project (Safe Road Trains for the Environment) - with Volvo Car Corporation has successfully completed the first test demonstrations of a multiple vehicle platoon.

The test fleet included a lead truck followed by three cars driven entirely autonomously at speeds of up to 90 km/h - with no more than 6 metres gap between the vehicles.

"The aim is for the entire road train to be completed in autumn 2012. By then we will have four vehicles after one lead vehicle driving at 90 km/h," says Erik Coelingh, technical project manager at the Volvo Car Corporation.

The SARTRE project is being driven by seven European partners and is the only one of its kind to focus on the development of technology that can be implemented on conventional highways in which platooned traffic operates in a mixed environment with other road users.

Recognising that the challenge of implementing road train technology on Europe's highways is not solely a technical matter, SARTRE also includes a major study to identify what infrastructure changes will be needed for vehicle platooning to become a reality. A number of stakeholder discussions will therefore be held. The participants in the first discussion included technical experts, politicians, legislators and traffic safety researchers. At the workshop a number of non-technical challenges for road trains were discussed, such as legal regulations, product liability and driver acceptance of automated vehicles.

Key future requirements identified were the need to agree a common terminology for platooning, such as criteria for defining when a vehicle becomes fully, as opposed to partially or even highly automated, and the need to address multiple and varied national regulatory law or to harmonise regulatory law.

The main advantage of road trains is that the car driver has time over to do other things. Road trains promote safer transport since the vehicle platoons are led by a professional driver in e.g. a truck and inter-vehicle reaction response times are much quicker. Environmental impact is reduced since the cars follow close behind each other and benefit from the lower air drag. The energy saving is expected to be in the region of up to 20 percent. Road capacity will also be able to be utilised more efficiently.