RAC rolls out universal spare wheel as ‘puncture no spare’ call outs predicted to reach 250,000 by 2015 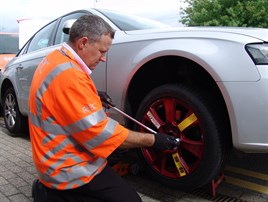 RAC rolls out universal spare wheel as ‘puncture no spare’ call outs predicted to reach 250,000 by 2015

Following successful trials, the RAC is rolling out a universal spare wheel designed to speed up the fix time and minimise the inconvenience of having a puncture without carrying a spare while out on the road.

During February, RAC patrols across the UK will be equipped with the wheel which provides a solution to the increasingly common problem brought about by manufacturers not including a spare wheel in their cars as standard.

As many fleet managers will know, the ‘disappearance’ of the spare wheel has arisen as a result of car manufacturers seeking to improve fuel economy and reduce carbon dioxide emissions by lessening vehicle weights. As spare wheels are relatively heavy (often weighing as much as 25kg-30kg), removing them from a standard vehicle and making them an optional extra has become increasingly common with manufacturers.

And, with car manufacturers obliged to ensure that average new car emissions do not exceed 130g of CO2 per kilometre by 2015 and 95g by 2020, the spare wheel is unlikely to make a comeback in the foreseeable future.

Although manufacturers provide a tyre inflation kit in place of a spare wheel, these are only suitable for carrying out temporary repairs on punctures up to 4mm and can be daunting to use at the side of the road. RAC patrols attending these breakdowns would firstly try to fix the puncture and, if this was not possible, would then either collect and fit a new tyre or, alternatively, tow the vehicle to the nearest garage, both of which can be time-consuming.

Developed with specialist manufacturer Dynomec, the five-stud, 17in lightweight alloy multi-fit wheel fits a high proportion of vehicles and will significantly cut down the time spent by members at the roadside, often in potentially dangerous situations such as on the hard shoulder of motorways. While the five-stud universal wheel fits a significant proportion of new vehicles sold without a spare, the RAC is also going to be piloting 50 four-stud wheels so that as many vehicles as possible are catered for.

Head of RAC technical operations Phil Ryan said: “The Dynomec universal spare wheel demonstrates how the RAC is at the forefront of providing innovative solutions to help our individual members and business customers get back on the road as quickly as possible after they break down.

“We understand why motor manufacturers need to reduce the weight of their vehicles in order to make them more fuel efficient and to meet EU carbon dioxide emissions targets and removal of the spare wheel helps them to achieve this.

“We believe the RAC universal spare wheel will very quickly become a welcome sight for both individual and corporate members as well as being a major benefit for business customers such as fleet managers who will be able to get their vehicles back on the road more quickly, saving both time and money.”

To find out more visit: www.rac.co.uk/business/