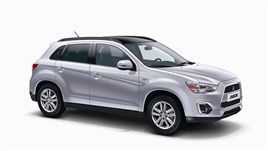 Over recent years diesel has dominated fleet new car sales, but petrol is due a comeback according to Mitsubishi managing director, Lance Bradley.

The ASX, Mitsubishi’s current biggest seller in the UK has seen a u-turn in petrol sales from when it was originally released in the UK with petrol now making up over two thirds of the crossover’s sales.

“There is a presumption that you have to have diesel, but petrol is improving at a much quicker rate, we have some models that have better mpg in petrol than diesel and is growing in popularity,” said Bradley.

Mitsubishi staged the world debut of a revised version of its compact crossover at the 2012 New York International Auto Show in April before the start of its European career at the Paris Motor Show.

According to Bradley, the latest ASX is more of a ‘refresh’ than a facelift and is expected to arrive in showrooms before the end of the year.

“The latest ASX is more of a freshen up than a facelift, we need to offer the newest version to those who come to change their vehicles after 3 years who already have an ASX, this will be key if we are to continue to drive sales,” said Bradley.