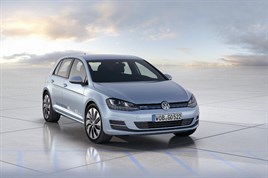 Prices for the all-new Volkswagen Golf have been revealed.  Not only is the new car lighter, more advanced, more spacious, more efficient and better equipped than previous generations of Europe’s best-seller, of which over 29 million have been sold, but it also offers better value, with UK prices starting at £16,330 –lower than its predecessor.

The petrol engine range starts with a four-cylinder 1.2-litre TSI unit producing 85 PS, rising via a 1.2-litre TSI 105 PS and a 1.4-litre TSI 122 PS motor to the all-new 1.4-litre TSI 140 PS engine with Active Cylinder Technology.  This helps to create an engine capable of 60.1 mpg (combined cycle) and 110 g/km (when fitted with a seven-speed DSG gearbox).

The two diesel engines at launch are a 1.6-litre TDI 105 PS and a new 2.0-litre TDI 150 PS unit.  Both feature the latest common rail diesel technology for maximum efficiency.  All new Golf models – both diesel and petrol – come with a Stop/Start system as standard, along with battery regeneration.

Gearboxes are a mixture of five- and six-speed manuals, and six- and seven-speed DSG units, depending on the engines’ power and torque outputs.