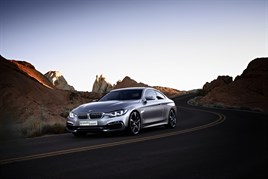 BMW will introduce a new four-seat coupé in 2013 to compete with the Audi A5 and Mercedes-Benz C-Class Coupé.

The BMW Concept 4 Series Coupé, revealed this week, suggests the production version of the 4 Series Coupe will attempt to stand out more from the 3 Series, with which it will share many of its components.

The model appears close to how a production version would look, despite being a concept car, and more details are expected closer to the car's launch date. A 4 Series Convertble is expected to follow.