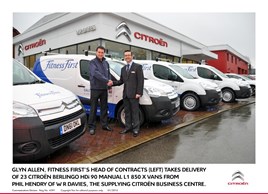 Fitness First, which has over 435 fitness clubs in 15 countries, is now operating 36 Citroën Berlingo and Dispatch vans.

“As a Carbon Trust Standard award-winning company, Fitness First is actively engaged in reducing its energy consumption and carbon emissions.

Fitness First’s new Berlingo vans will be used by its maintenance technicians, who maintain the company’s swimming pools, buildings and gym equipment at the 150 Fitness First and Klick Fitness Gyms in the UK.

To suit this role the new Berlingo vans are custom-racked and lined. Equipped by Fleethire, each van now has a vice that slides out of the rear on a beam and locks to provide a stable work station for cutting and drilling metal or masonry.

Fitness First was the first company of its kind in the UK to be awarded the Carbon Trust Standard. As part of its commitment to cut its emissions and energy consumption, Fitness First has achieved significant reductions of some 12% in less than 5 years and the Citroën vans have been an integral part of this strategy.