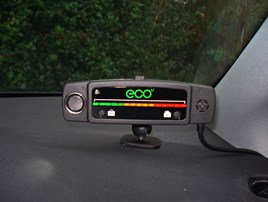 Trakm8 designer, developer and manufacturer of GPRS based tracking units to the fleet industry have announced the launch of their driver behavior module at the CV Show 2012.

The new driver behavior module can be used with either of Trakm8’s tracking units, the T8 and the recently launched T8 mini.

The module can be situated on the dash to give the driver visual feedback through Red-Amber-Green (RAG) traffic light indicators that denote their driving style in real time; highlighting areas for safer, more fuel efficient driving.

These configurable feedback areas include braking and acceleration, cornering, over revving, idling and speeding. These areas are defined by customised thresholds to the customers’ requirement.

The information is feed directly to the driver but also in a report sent back to fleet manager for review.

By making subtle changes in these driving styles and behaviours, customers have seen a significant improvement in fuel usage, says Trackm8.