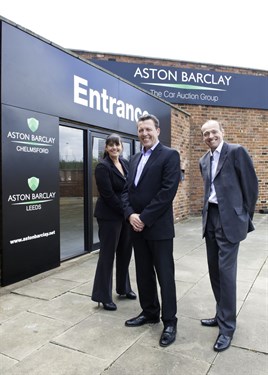 Aston Barclay Group has named the date which its auctioneers’ gavel will first fall at its newly acquired site in Leeds – beginning the next chapter in the company’s 27 year history.

Together with their other sites in Chelmsford, Westbury and Prees Heath, the opening of the site in Leeds positions the group as a truly national vehicle remarketing operation.

Friday, May 11, will mark the company’s maiden Friday Fleet Sale. The launch sale, supported by some of the biggest companies in car leasing sector including Motability, Alphabet, Leasedrive, Ogilvie and Zenith, will feature over 250 cars.

Aston Barclay Group managing director Tim Hudson said: “Leeds is certainly taking shape. We will be hitting the ground running with Leeds, the Group has worked tirelessly over recent times to build on its reputation for being efficient, both for vendors and buyers, and Leeds will be no exception.

“The final elements of the building work are due to be complete by the 20th April and the team is now in place and fully trained. This is a very exciting stage of our continued development as a Group.”

Strategically placed to serve both buyers and vendors operating in North of England and Scotland, the Hillidge Road site on the south side of Leeds is extremely convenient to the M621.

Aston Barclay Leeds will also be holding a General Sale on a Tuesday morning, the first one of which will be on Tuesday, May 15.