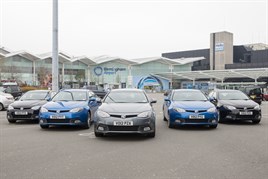 MG Motor has landed a fleet deal from Birmingham Airport for the MG6 GT, making it the first local fleet deal to be won by the MG Birmingham sales centre which opened at the MG factory site in September.

The five GTs, all in SE trim, will be used as management cars and will be regularly seen at the huge regional airport which is used by more than 8.5 million passengers every year.

Joe Kelly, deputy CEO of Birmingham Airport, said: “We’ve been impressed with the MG6. It’s a great car to drive and offers excellent value for money. The fact that it comes off an assembly line at a factory just a few miles away from us is a bonus.”

The cars, two in Union Blue, two in Pitch Black and a Granite Grey model, were handed over to the airport on Friday.

Gary Egan, who heads the MG Birmingham Sales Centre, said: “We’re delighted to be supplying cars to such a prestigious customer as Birmingham Airport.

“We’re generating more and more interest in the MG6 but our first fleet order is quite a milestone on top of our recent successes with retail customers.”