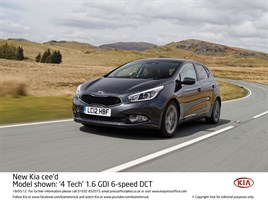 This continued sales success comes as Kia replaces it all-European Cee'd model - the new car went on UK sale on June 1 and the May record was reached despite the previous version of the five-door hatchback being in run-out.

Kia's global sales for the year were up by almost 12% compared to 2011 thanks to sales increases in all major regions including the domestic Korean market - up by 7%, Europe - by 28%, China - by 2% and North America by 9%.

Michael Cole, managing director of Kia Motors (UK), said: "To post a new record May as we were getting ready to replace Cee'd with the all-new model was particularly pleasing and it shows that our dealers are continuing to pull lots of new customers into the brand.

"I am very hopeful that with the launch of the new Cee'd this performance will continue so that we can reach our sales goal for this year of up to 65,000 vehicles.”