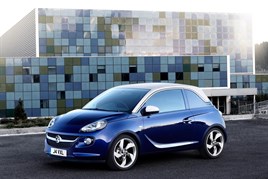 Vauxhall has released the first official pictures of the new Adam, hoping to rival the Fiat 500 as part-car and part-fashion accessory.

Using upmarket materials the Adam is a three-door, four-seater that will be unveiled at this year’s Paris Motorshow, before appearing in UK showrooms early in 2013.

The Adam incorporates a ‘floating’ roof which is visually disconnected from the body but it also retains design signatures from other Vauxhalls, such as the line around the door handle (Astra GTC), the wing-shaped chrome grille bar (new Astra) and the blade shape in the lower doors.

The Adam offers a high level of personalisation options. Available in three trims from launch – Jam (fashionable/colourful), Glam (elegant/sophisticated) and Slam (racy/sporty), while there are almost unlimited visual combinations, with a wide variety of exterior colours – including two different roof colours - interior colours, equipment and materials. Customers can even choose their headlining, including an LED-lit starlight roof trim. 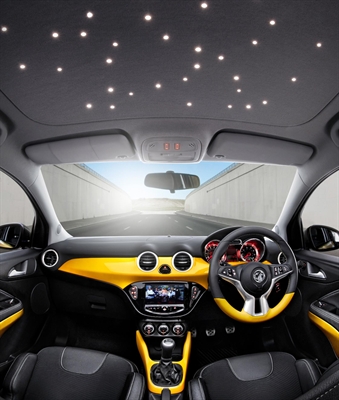 The Adam will be offered with a choice of three Ecoflex four-cylinder petrol engines from launch: a 1.2-litre 70bhp, plus two 1.4-litre engines with either 87bhp or 100bhp. All will be available with optional stop/start technology and have a five-speed manual gearbox.

Later it will be the first car in Vauxhall’s range to adopt the new-generation small petrol engine, featuring direct injection and forced induction, and an all-new six-speed gearbox.

Electronic stability control will be standard on all versions, while customers will also be able to choose a self-steering parking assistance option - a first in the sector.

The Adam will be available to order after its official premiere at the Paris Motor Show in September, with the first cars reaching UK customers in January 2013, with prices expected to start at about £10,000.