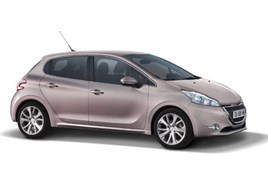 Peugeot has a record order bank for its new 208 supermini, which was available for fleet managers to drive at Company Car in Action (CCIA).

More than 3,000 orders have been placed, according to Phil Robson, director - fleet and used vehicle operations, at Peugeot.

“We’ve never launched a car with that many orders in the bank,” Robson said. “It’s been hugely well-received by fleets.

“People in fleet have been quicker than retail to reappraise Peugeot and I think the 208 will accelerate that situation.”

“When we go to Euro6 I think small diesels will become more challenging to sell from a cost perspective as a manufacturer because of the stipulations Euro6 brings,” he said.

“I also think we’re probably at a point where you can’t reduce CO2 emissions much more with a diesel engine, without putting an electric engine in. But there’s some scope still to reduce petrol.”

Robson added that the Government’s decision to remove the 3% diesel supplement from April 2016 could cause “a fly in the ointment” but he still believes petrol will become more attractive in small cars.

As of May Peugeot’s total fleet sales year to date were up 9% while true fleet was up 3%. Robson puts this growth down to 508 which has now had its first full year of sales.

Van sales have also been strong with Robson predicting that Peugeot could end the year with a van market share of around 9% (up from 5.8% four years ago).

However, he was not prepared to make car fleet sales predictions. “It’s more important for us to hit budgeted volumes than chase market share,” he said. “It’s about managing residual values.”