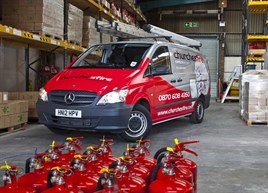 The round-the-clock servicing capability of Mercedes-Benz commercial vehicle dealers was a key factor in persuading Churchesfire to switch its van fleet to the three-pointed star.

Churchesfire’s head office is in Chandlers Ford, near Southampton, and the company provides a comprehensive array of fire safety services to customers nationwide.

Pentagon won the order in the face of competition from agents representing two rival manufacturers – unlike Mercedes-Benz dealers, which sell and maintain trucks as well as vans, neither could offer a dedicated commercial vehicle service.

"The Vito is a quality vehicle with a high standard specification and stylish good looks,” he said. "But what really swung the deal for Pentagon was its 24-hour servicing offer, which neither of the other van suppliers could match.

"This is great for us, because it means all maintenance and repairs can be undertaken during the evening or overnight, so our vehicles are always available for work when we need them."

Established in 1992 by Paul Topley, who remains at the helm as managing director, Churchesfire provides a full range of fire protection services to more than 12,000 customer sites nationwide.

Eye-catching in their full, vinyl wrap liveries, by Amber Signs, of Bishops Waltham, the new Vitos are being used by the company's installation and maintenance engineers.

The local vans are being serviced by the workshop team at Pentagon’s depot on the Nursling Industrial Estate in Southampton. Those vans based further afield are being looked after by the most conveniently located Mercedes-Benz dealers.

Launched last year, the Euro 5-compliant Vito 113CDI is powered by a 2.1-litre, four-cylinder diesel engine producing 136bhp and 229lb-ft of torque, both significantly up on the 111CDI model it replaced. CO2 emissions, meanwhile, are much reduced, and fall comfortably below the 200g/km threshold.

The Vito 113CDI drives as standard through a six-speed Eco-Gear manual transmission, which has been designed specifically for van applications. This improves flexibility and maximises fuel economy, as well as being smoother and quieter, and able to handle higher torque inputs.

Burville added: "Our engineers are delighted with their new vans and we intend to replace our remaining non-Mercedes vehicles with more Vitos at the first opportunity.