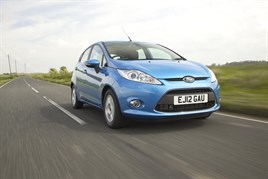 New car registrations improved by more than 9% in July, according to the Society of Motor Manufacturers and Traders, with private sales up by a remarkable 26.4% year on year.

Fleet sales, according to the SMMT, were down by 1.6% in July, while business sales (organisations with fleets of 10-25 vehicles, plus dealer demonstrators) were up by 2.1%.

Figures from January to July show an increase of more than 10% in private registrations, while fleet registrations are steady down by 0.3% and business sales suffering a decrease of 15.7%.

The figures have prompted to SMMT to increase its projections of total car sales this year to 1.97 million, and analyses have raised questions over howthe registrations have been achieved when the country is still in recession.

David Raistrick, UK manufacturing leader at Deloitte said: "The continuing growth in new car sales in the UK, compared to increasing pressure due to tough economic conditions, which is resulting in reducing sales elsewhere, is starting to raise questions in global markets.

"This has led to recent suggestions from both retailers and industry insiders that an increase in pre-registration of new cars is perhaps distorting the level of growth being reported in the UK market, particularly in respect of private sales. Official data shows that recorded pre-registrations are up 76% on the first six months of 2011.

"While the numbers of vehicles are not material to the overall new registrations being reported, it does raise the question as to what is driving the increase."

"Germany is the only other major European market to have shown growth over the first six months of the year but the recent disclosure that nearly 500,000 pre-registrations had taken place in the first six months of 2012, representing 3 out of every 10 new registrations, has raised the spectre that the German new car market is actually in recession. Indeed, our analysis is that that German market has probably suffered a 5% decline during 2012.

"While the practice provides a short term fix for the manufacturer by moving units into the retail sector, the long term effect can only be to undermine residual values and potentially damage brands."

Sue Robinson, director of the RMI National Franchised Dealers Association (NFDA) added: "In light of speculation about the new car market the NFDA, representing franchised car, commercial vehicles and motorcycle dealers, are carrying out an review of the registration figures to a ascertain a more transparent view of the market."