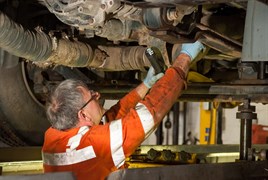 Lessons learned from the review of a council fleet, which revealed a major failing in data management, have saved Council Tax payers more than £400,000.

North Ayrshire Council told Fleet News it had cut fleet management costs by a sixth after discovering crucial data was not being maintained.

A dozen employees charged with keeping its fleet management software system updated had reverted to administering the 700-strong fleet manually. Records were duplicated and visibility of scheduled maintenance jobs, vehicle allocation and stock control – once provided by the computer-based system – became blurred.

The council’s transport department was failing to operate to its potential; driving up costs and heightening the risk of health and safety failings.

Transport manager Gordon Mitchell was recruited from the private sector to lead analysis of the existing fleet strategy and identify areas for improvement.

He discovered that, while the local authority had installed Chevin’s RoadBase software in the early 1990s, its potential to deliver maintenance and repair schedules, as well as fuel consumption figures and accident data, was faltering.

After 20 years, staff who had understood how to get the most out of the fleet management system had simply moved on.

Mitchell said: “Any system that centralises data and makes it easy for users to access all the information they require in one place is going to produce benefits.

“However, as employees left the department, the knowledge of RoadBase left with them, so gradually, as the years went by, its use declined and people reverted to manual report production and purchase order creation.”

Mitchell and his team explored several options in a bid to regain control of the council’s fleet operation and cut costs.

One of the solutions considered was investing in fleet management software from another provider.

However, when they compared functionality and the additional investment required, they opted for a data cleanse, upgrade and training programme from Chevin to educate employees on how to use the software to its full potential again.

The council undertook a complete fleet review to ensure all new data input into the system would be accurate and up-to-date.

At the same time old data was removed, creating a blank canvas for the newly-collated up-to-date information to be stored.

An upgraded version of the software was installed and a systems expert from Chevin was deployed on site to provide in-depth training to Mitchell and his team.

“I didn’t want to invest time and resource into conducting reviews and inputting fresh and accurate data if two years down the line we were going to find ourselves in the same situation,” Mitchell said. “To achieve tangible cost savings training was essential.”

In the past two years, the system has received a 100% uptake rate within the transport department, reducing administration and allowing staff to focus on other tasks.

Processes have been streamlined with purchase orders, hires, departmental recharges and reports all created through the system.

Details are stored as a central record against the relevant driver, vehicle or asset.

Visibility over maintenance and repair schedules has also improved and the likelihood of any of the fleet’s 1,300 assets missing servicing or inspection dates decreased, thanks to a traffic light system which notifies users of pending, due and overdue jobs.

In total, it has helped save the fleet department more than £400,000 over the past two years.

“The system has become our Bible; our go-to resource and the backbone of the department,” Mitchell said. “The savings speak for themselves.”

Savings to be reinvested

Reinvesting a proportion of the savings made into delivering further improvements within the transport department is high on the agenda for North Ayrshire Council.

It has announced plans to invest in migrating to Chevin’s upgraded, web-based fleet management application FleetWave.

With implementation scheduled for the third quarter of 2012, the council aims to take advantage of a range of additional benefits.

The most valuable, according to Mitchell, will be the ability for cross departmental communication facilitated by the web-based nature of the software. This will give staff in other areas of the organisation access to input data relevant to their role – freeing-up time and resource.

In addition, the fleet team will be able to define key performance indicators (KPIs), ranging from fuel usage and CO2 emissions to vehicle inspections and maintenance schedules. This will allow the council to track progress and assess trends for each KPI in real-time through the system’s dashboard.

The reporting process will become fully automated, with graphical-based reports emailed directly from the system to pre-defined recipients at pre-set intervals.

Accessible from anywhere with a web connection, including via smart phones and laptops, the council will also have the option of empowering remote workers to update the central system following each job, instead of inputting several lots of details at the end of a shift.

Ashley Sowerby, managing director, Chevin Fleet Solutions, said: “Operating a public sector fleet against current economic conditions is a major challenge. This is why complacency when it comes to processes and operations is not an option.

“Local authorities simply can’t afford to sit back and allow fleet costs to spiral out of control due to outdated or inappropriate methods of fleet management.

“North Ayrshire Council has done what many other councils around the UK need to do; implement new tools and tactics to reduce cost and maintain service levels.

“I’m proud that Chevin Fleet Solutions has had a role in this.”