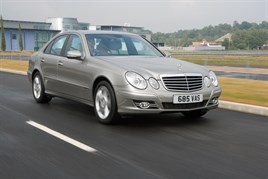 The 2006-09 Mercedes-Benz E-Class has been judged Europe's most reliable car by an aftermarket warranty provider.

The facelifted E-Class addressed a range of reliability complaints with the model introduced in 2003, and according to the survey it seems the work by Mercedes-Benz paid off.

Fleet News will publish its annual FN50 Reliability Survey of more than half a million contractt hire and lease cars in November.