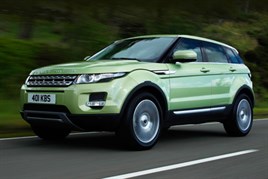 Jaguar Land Rover is to create 800 jobs at its Solihull plant to support the introduction of new model programmes throughout 2013.

This is in contrast to Honda's announcement that it plans to cut 800 jobs, read more here.

Its sales were up in every major market due to new model introductions and update programmes, with particularly strong performances from the UK, China and the U.S.

Phil Popham, director of group sales operations at Jaguar Land Rover, said: "Looking ahead to 2013, we are continuing to invest in our business to support our ambitious plans for growth and we will be introducing eight new or refreshed products throughout the year.”

In 2012, Land Rover delivered a very strong performance in its 177 markets with retail sales up 36% globally.

The brand's top five markets were China, the UK, United States, Russia and Italy which accounted for 65% of sales alone.

Notable product performances were delivered by the Range Rover Evoque (pictured) with 108,598 vehicles sold in its first full year of sales – more than any other previous Land Rover model.

Land Rover has also seen strong performances from its Land Rover Discovery 4/LR4 (up 3%), Range Rover Sport (up 4%) and first deliveries of the all-new Range Rover have now commenced.

The launch of the XF 2.2 Diesel, XF and XJ 3.0 litre powertrains, and the introduction of various new derivatives including the XF Sportbrake, has widened the brand's portfolio and geographic reach.

The brand's top five markets were the UK, United States, China, Germany and Russia which combined equated to 71% of sales for the year.

The XF continues to do well with sales globally up 13% and the introduction of the new XJ and XF All Wheel Drive have been well received internationally, particularly in the U.S.