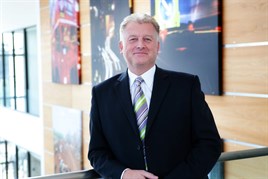 David Bird, managing director at Leasedrive, said: “Sean has played a fundamental role in the development of the group since joining shortly after commercial director Roddy Graham and I bought into the business back in May 2003.

“Many of our most valuable, long-standing blue chip customer relationships were won by Sean.

“In his new role, reporting directly to me, Sean will have ultimate responsibility for the new Daimler Fleet Management portfolio, growth and performance.

“Having seen the Mercedes-Benz Financial Services relationship through from initial contact in August 2011 to the partnership we enjoy today, Sean will now switch his focus to maximising the many growth opportunities that now exist through this relationship, and ultimately looking for further potential partnerships.”

Farrell joined the Leasedrive Group in November 2003 from Travelex Global and Financial Services Limited, where he was partnership development director.

Prior to that, he spent eight years at Arval PHH Vehicle Solutions, first as an area sales manager and then as group account director.

Previously, he held a number of sales positions with Pallas Rentals (SG Warburg), Barclays Mercantile Credit Company and Mastercard, having served as a senior commercial apprentice at British Aerospace.